Today is my last day in Jerusalem – I’ve been here since December 31st – so I’ve seen one year pass into another here in the world’s holiest and most contentious city. It’s been said that when people spend too much time in Jerusalem, they start going crazy – it seems like the rest of the world fades and all that matters is here. According to those who’ve studied the syndrome, being in Jerusalem may cause some to experience a sort of religiously-themed obsession – a delusion or two – and it can affect Christians, Muslims and Jews.

While I saw plenty of that around me, not to worry – I am of sound mind and spirit having been here running Global Next’s conferences and a few other things. I am no more delusional than usual and none of my delusions are specifically related to being in Jerusalem. But after nearly a month of spectacular conferences, sights, conversations and personal and spiritual growth, I thought I’d summarize some of the highlights from this very special place.  So, in no particular order, here are my thoughts:

In all honesty, I’ve never needed to be in Jerusalem and see the Holy Sites to bolster my faith. I’ve got God’s Word for that. I do, however, enjoy coming here and conducting leadership and geopolitical conferences that help participants see what God has done, what He has promised, what is happening now in our world and what God promises will come. The two  back-to-back events conducted here were amazing, complete with top-notch students, meaningful places to visit (Church of the Annunciation, Nazareth, Galilee, Jordan River, Church of Holy Sepulcher, Temple Mount, Bethlehem, Hebron, Mount of Olives, Masada and the Dead Sea, just to name a few,)  insightful conversations, opportunities to connect  a few important dots – and even a snow storm in Jerusalem. Watching our conference participants sort out a complicated corner of the world and recognize God’s sovereign hand moving in our world is a satisfying experience that I would wish upon all of my readers. 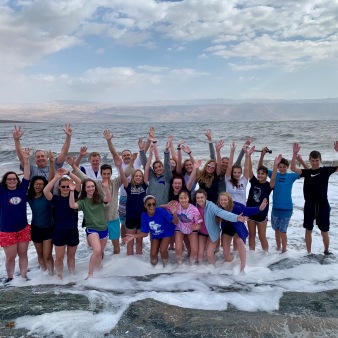 Me and the Rabbi

On my final Shabbat (the Sabbath) in Jerusalem, our group was finishing up our final conference session and discussion. Suddenly we were interrupted by a very urgent  hotel staff member. A Rabbi had come by to inspect, and wouldn’t you know it – using my data projector to show a PowerPoint presentation put me – and the hotel – in violation of the Shabbat.

As the Rabbi suggested, I might as well have been killing pigs and hosting some alcohol-themed Christmas party. The young Rabbi – who I think just might have been a bit over-enthusiastic regarding his responsibilities, threaten to remove the hotel’s Kosher endorsement. Who knew I had so much power that my simple actions could cause such a stir? And of course I complied immediately, because everyone who knows me, knows how I never ask questions or put up an argument or point out hypocrisy, such as “Should we turn off all the lights in the hotel, or just my data projector?” Or “Are you sure, Rabbi, that you should be out working today, inspecting hotels, instead of resting on the Sabbath? What do you think would make God happier?” That would be so unlike me… 🙂

Me and the Artist

Udi Meriozi is a unique Jewish artist who creates beautiful paintings. He was also the first Jewish boy to enter the Old City of Jerusalem after the 1967 Six-Day War. A few years ago, he became very sick. The doctors didn’t know what was going on, but his health was failing so rapidly that it appeared that he would not recover. Then, as he tells it, Christians who had visited his shop started praying for him – in large numbers. And inexplicably to the doctors, he began to recover. 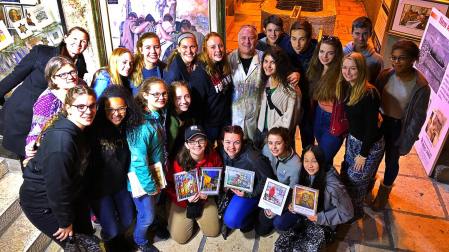 Since that time, he told me that often when he starts  painting, he doesn’t know which direction the painting will take. But more often than not, his work takes on a very prophetic, Messianic theme. Using themes and verses of prophecy from the Old Testament, he’s creating very moving pieces that point towards the Messiah and show evidence that God is working in his heart and life. He knows that something spiritual is happening to him. And I am very grateful for the time he took with both of our conference groups to share his art and his story. He’s on his way to finding the Redeemer who had already come and who will come again. 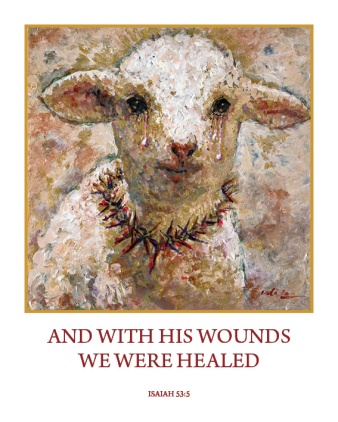 I know, I know – I should keep my opinions to myself. But it just seems that when your opinions and as good as mine – and rooted in historic fact, it’s just hard to always be quiet. 😀 So, when hanging around the Old City after my students had already returned back to the US, I allowed myself to enter into a discussion with some Muslim shop keepers. I found that simply by stating my opinion – when asked – about the proper ownership of the city of Jerusalem, that it was like setting off a nuclear bomb. I stated that in my view, the city was and always will be the undivided capital of Israel.

The anger, the threats, the shouting, the accusations that I had committed “blasphemy” by insulting their religion was a quite the episode. But why ask my opinion if you don’t want to hear it? Oh, the peaceful and reasonable verbal skills of Palestinians still baffles me. 😛

Me and the Shuafat Refugee Camp

Shuafat (Shu’ Fat) is one of 59 Arab refugee camps run by UNRWA, (The United Nations Relief and Works Agency). But Shuafa is the ONLY Arab refugee camp located in Jerusalem itself – or in any Israeli-administered area. While the camp is now on the other side of the security wall, it is technically still a part of Jerusalem. UNRWA’s (who runs most of the local services) goal, according to former Jerusalem Mayor, Nir Barkat, is not to help resettle people and assist them in getting on with their lives, (as UNHCR does) but rather to maintain Palestinian refugee status – until they can return to the land that is now the sovereign State of Israel. Mr. Barkat would like UNRWA completely kicked out of Jerusalem.

Through their educational system and textbooks, UNRWA teaches the children of Shuafat (and children in other refugee camps) that they must fight for the right of return to the cities where their grandparent and great grandparent were born, prior to Israel’s War for Independence in 1948. Students are taught to hate Israel and to use violence to achieve their goals. (David Bedein, 2019,  Israel Behind the News) And if you’re reading this and you’re an American, know that until very recently, until Donald Trump, your tax dollars were paying for this kind of “war education.” And that the U.S Congress is well aware of what’s going on – but seems to be quite silent on the issue while other donors have picked up the financial slack that was created when the U.S. stopped their UNRWA funding.

Most of Israel’s involvement in the camp is limited to the checkpoints – some of which take more than ninety minutes for Shuafat residence to get through. Because Shuafat is a breeding ground for a number of terror groups, such as Hamas, Fatah, Islamic Jihad, and The Popular Front – all of which operate in the open with support from the residents – even the Israeli police stay away, which leaves the camp open to increasing terrorism,  crime, murder, weapons possession and drug use. Because the town is open to the Palestinian Territories, it has become a haven for non-refugee fugitives from from Israeli and Palestinian Authorities.

When I visited the camp, I did not see the benefit of the hundreds of millions of dollars that pour into the coffers of UNRWA. I saw filth, poor sanitation, buildings that were far below building codes and no official electric grid – just tangles of wires tapping in to any source of electricity that could be found. And of course I found people – more people than this camp was ever designed for. Estimates are hard to come by – official sources say that the camp is comprised of 30,000 residence. But other sources put it as high as 80,000. 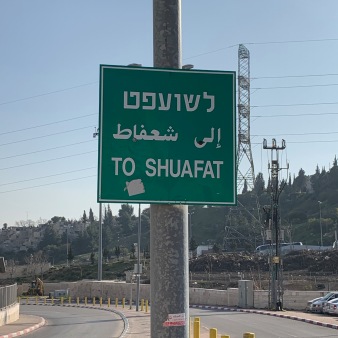 The people I met with in Shuafat seemed thrilled that a foreigner would make the visit – because rarely does anyone from the outside come to visit a place like this, unless it’s the rare Israeli official who’s come to fine you for a building code violation, or, as in November 2018, to destroy 20 commercial businesses in order to deal with building code violations, constant overcrowding and street congestion.

Visiting Shuafat, I could tell from the conversations, the attitudes and the public artwork/graffiti, (pictures of people wanting to escape the walls, pictures of “martyrs” and prisoners)  that the residents feel caged, restricted and forgotten. The cynical view would be that Israel has created a community without basic services and without law enforcement, closing their eyes to the constant increase of lethal weapons, murders and drug use so that these refugees will eventually kill each other off. Israeli officials would see it differently: In getting rid of UNRWA, Israel would reduce the indoctrination and culture of violence and anti-Israeli sentiment and begin offering the services to this area that they so desperately need – including education in non-UNWRA schools.

So why have these people stayed in Shuafat? It all goes back to constantly indoctrinating residents with the narrative that Israel has no right to exist, and if they wait long enough, they will be able to destroy Israel and reclaim their homes and the land that was once under Muslim control. But after 70 years of Israeli independence, it might be time to start thinking about other options – for the sake of the children who need lives of purpose and futures with hope, not lives fueled by pointless hate.