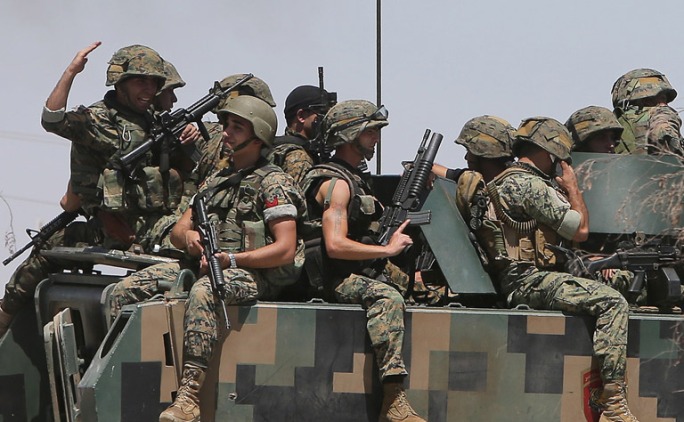 Regardless as to the US-led airstrikes which began several weeks ago, ISIS remains on the march. As I write this, the strategic town of Kobani, on Syria’s border with Turkey, is under siege. It seems likely now that Kobani will fall to ISIS – and Turkey seems to sit on the border with tanks, but does nothing. Time.com put it this way, “If the ISIS militants take control of Kobani, they will have a huge strategic corridor along the Turkish border, linking with the terrorist group’s positions in Aleppo to the west and Raqqa to the east.”

A few days ago in Beirut, I sat down with Radwan Mortada, an investigative journalist for Al Akbar English and noted expert on terrorism and terrorist groups in the Middle East. Here’s what we talked about:

Lebanon borders Syria – you’ve already had a border town temporarily taken over by ISIS militants. What is the general view of ISIS in Lebanon?

Most are afraid. They think they will go to sleep and wake up with a nightmare. But in the mind of ISIS, Lebanon is already a part of Syria – they already consider us to be part of the Islamic State.

In August, the Islamic militants took the town of Arsal – a border town in the north of Lebanon. Thirty-eight soldiers were kidnapped. Some have been assassinated. The return of others has been negotiated. Some are still held hostage.  The media will tell you that the Lebanese army has retaken the town – but ISIS and al Nusra Front (another militant group in the Islamic State) come and go as they like.

The real dangers are now for Jordan, Saudi Arabia and Kuwait. Those are the countries in the sights of ISIS and al Nusra Front now.

How big a threat is ISIS to the region and the world?

Both ISIS and al Nusra Front want the same thing – the want an Islamic Caliphate. ISIS uses killing as propaganda. They post their mass killings and beheadings on social media. Al Nusra Front is guilty of the same violent actions, but they have stopped advertising what they’re doing. They realized that posting a beheading online scared the West, but it also scared off potential recruits for the movement. Al Nusra Front are playing a smarter, more subtle PR game now. Ultimately they will prove to be more effective at recruiting new members and radicalizing them. They will prove to be more dangerous.

If ISIS and al Nusra Front have the same goal, why are they not united?

They were united and working together. But the division between the two groups is personal – it’s between the two leaders, al-Baghdadi (ISIS) and al-Julani (Al Nusra Front). The two groups will not be united until one of those leaders is dead. And they are actively trying to kill one another.

Is the US-led campaign proving effective in deterring the militants?

What I can tell you is this, the US will eventually need to put troops on the ground in Iraq and Syria if they want success. It won’t happen with just airstrikes.

I have a journalist contact in Syria who tells me that once the airstrikes from the West started, the strategy of ISIS is to melt into the general population. They hope the US will follow them, bomb populated areas and unintentionally kill many civilians in the process. This, they believe, will promote the cause for the Islamic State and unite people against that West. What do you think?

Yes, they are doing this – and this will definitely increase efforts to recruit fighters. It simply increases membership locally and from foreign fighters. Already the airstrikes themselves are helping to increase membership. Another reason that ISIS will be difficult to defeat is that they are the people now, not just a militant group.

What impact, if any, is ISIS and al Nusra Front having on Israel, which also borders Syria?

Two towns near Syria’s border with Israel, Dar’a and al Qunaytirah are currently controlled by al Nusra Front. At the present time, they won’t do anything against Israel because they feel they are too young and don’t want to take that risk until they are stronger and more prepared. But if they did a strike on Israel (and there is some pressure for this group to take action) that would put them on the map and increase recruitment to a large degree. It would make al Nusra Front more attractive than ISIS in the eyes of the people.

Radwan also told me that recent intelligence reports indicate that attacks were likely inside Lebanon in the days to come – most likely coming from the Abdallah Azzam brigade, a Lebanese radical group. Radwan says that the target is the Lebanese army and Hezbollah, potentially creating more instability in already fragile Lebanon.

In the bigger picture, 60 countries have signed on to the coalition to halt the Islamic State from their continued advances in Syria and Iraq. To be sure, many of the allied nations are simply providing political support, humanitarian aid, supplies or training for Kurdish fighters. Recently, Iran offered material support to the country of Lebanon to help keep ISIS at bay. The Lebanese have mixed feelings about Iran’s offer – but as Radwan would say, we’ll take help from wherever it comes. The question now is this: Can ISIS and other associated militants be defeated (or at least significantly degraded) or is it too little too late?