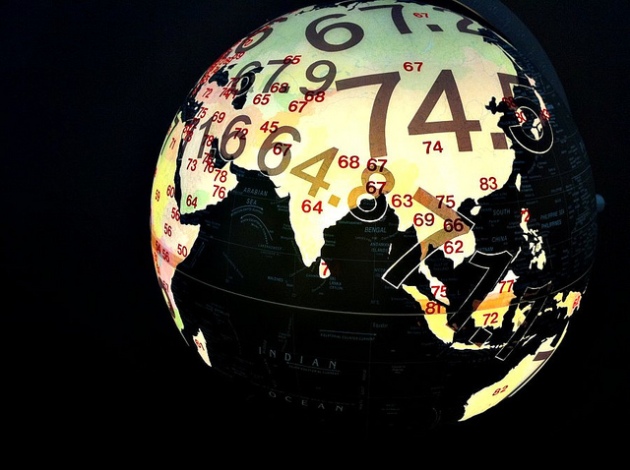 Every now and again, it’s interesting to take a raw look at the numbers of the world – and what those numbers might mean. So here’s my first-ever “Global Update by the Numbers.”

43.1 Million: deaths this year. (www.worldometeres.info) Meaning: That’s more than 143,000 people per day slipping into eternity. Ever think about that?

2.7 Billion: Internet users in the world (World Development Indicators- WDI) Meaning: We are connected – in ways no one would have imagined 20 years ago.

1.58 Billion (and counting!): Google searches today (October 2, 2013) (Google Inc.) Meaning: There is lots and lots of information out there – very little consensus on truth.

14,672:  Days to the end of oil (based on current consumption rates, we have about 42+ years left) (Energy Information Administration – EIA) Meaning: Maybe we’ll have one less thing to fight over? Nah – we’ll think of new things…

100,000: The minimum number of people killed in Syria’s civil war, according to the UN.   More than 6 million Syrians have had to flee their homes – that’s 1/3 of the population. 2 million have fled the country completely. (NBC) Meaning: Maybe your “bad day” isn’t as bad as you thought – perspective is a good thing…the world is hurting.

81: Number of people killed in historic church in Peshawar, Pakistan on September 22, 2013. In addition to those killed, more than 100 were wounded when leaving the church on Sunday morning after services. It was one of the deadliest attacks on the Christian minority in Pakistan in years. (CNN) The Jundallah wing of the Pakistani Taliban claimed responsibility – a spokesman said, “They are the enemies of Islam, therefore we target them.  We will continue our attacks on non-Muslims on Pakistani land.” (The Guardian)  Meaning: The world is a dangerous place – with people with powerful beliefs and dangerous ideas.

40: Minimum number of students killed at the Yobe State College of Agriculture in Damatura, Nigeria on September 29, 2013. Many were killed while they slept. The attack is being attributed to extremist group Boko Haram. According to the New York Times, Boko Haram has targeted government institutions, especially schools who provide Western-style education not based on the Koran. (New York Times)  Meaning: Extremism in any form produces hatred, violence and death – no other way to look at it.

2: Number of Canadians being held in custody in an Egyptian prison since August 16th. According to Al Jazeera, the two were on their way to Gaza where one was to teach emergency room medicine and the other was considering producing a documentary. By most reports, the two nosed around the wrong place at the wrong time in Cairo during the worst of the post-coup violence. (Al Jazeera) Meaning: Canadians. Enough said. 🙂

800,000: Government employees furloughed due to the 2-day (so far) US government shut down. (USA Today) Meaning: People who represent our interests don’t play well together. Who exactly are they working for?

There you have it – a little overview of the world. You have been informed. What you do with the information, and how you choose to live, is up to you.

One thought on “Global Update by the Numbers”