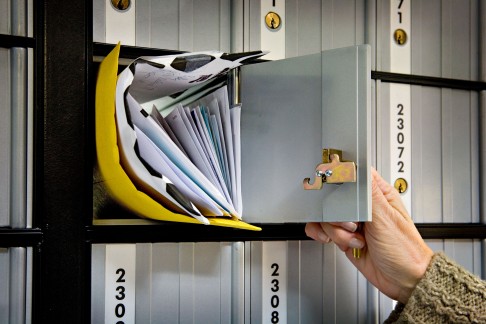 I was standing in the post office in Frisco, Texas, where I live. Standing just ahead of me was a man of, shall we say, advanced years. I do not know exactly how old he was – my conservative guess is somewhere around 112 years old. I do know that his youngest “child” was 65 years old. And he was a friendly sort. He used fun words like “blood kin,” and “ballyhoo” and “cockamamie”- and while others were ignoring his idle chatter, I thought, “Who knows? Maybe this guy is the smartest guy in the world.” So, I engaged.

As our conversation unfolded, he told me that he had two post boxes in this particular post office. He went on to share that he receives about 100 or more letters in each box every single day, six days a week.

That’s a lot of mail! I congratulated him on his obvious popularity and he confirmed this fact by stating that everyone wanted to know what he thought about things. Well, he was clearly delusional – or brilliant. He was either the most popular person I’ve ever met – or just a man with three teeth left in his head. He was either the spiritual twin to the Dalai Lama, or a homeless man. Ugh – it’s so hard to tell anymore!

But I couldn’t keep myself from continuing the conversation. So, I said, “Well, I don’t have a stamp on me to write you a letter and send it to your post office box. But since we’re both standing here – why don’t you give me some advice?”

He looked at me – and said, “Sonny (which of course is everyone’s favorite way to be addressed) – I will tell you something about money. If you have money – and you spend it – you will not have it anymore.”

Absolutely mind-blowing. “Uh sir – thank you – that is magnificent. Do you offer financial seminars or consulting services?”

Well, I cannot argue with that information. He’s not wrong. But it got me thinking about the kind of information each of us leaves behind for those who come after us. What will be the wisdom you eventually pass on to others?

Author John Maxwell says that in the end, our lives will be summed up in one sentence – so we should go ahead and pick it now. Maybe that’s also good advice – to imagine the end before we get too far into the middle.

Great wisdom that is worth passing on to others is always based on truth, it is timeless and it has the ability to change lives.  It also seems to come from people who live with an eye towards purpose- those who want to live for something bigger than themselves. So, here’s my wisdom for my readers – it’s from one of my favorite quotes by Benjamin Franklin: “If you would not be forgotten as soon as you are dead and rotten, either write something worth reading or do things worth the writing.” Live big people – live post-office-box-big.

[Check back next week – I’ll give you my take on what’s going on in Egypt. Global Next has an office there – and we’ll share the thoughts of Global Next’s interns who are in the middle of the chaos. Your prayers for those in that country are much appreciated!]