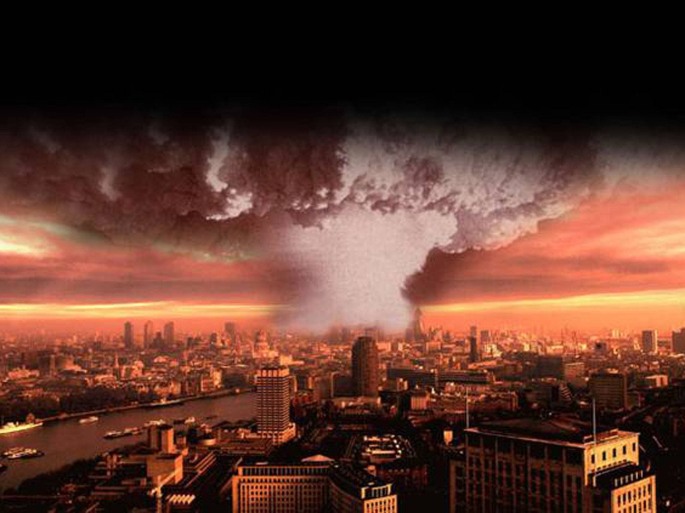 Rarely has one single month received so much attention, or had so much going on! It does seem that this ninth month of the year has an unusually busy dance card – and most of it seems to hint at some grand ending for our planet. It’s a feast for conspiracy theorists, but even if you’re a skeptic, it’s worth paying attention to the convergence of events happening in September 2015. Here’s a brief rundown of some of the more significant events set to occur:

September 13: The last day of the Shemita year: So what’s the deal with Shemita Years? It’s the end of a cycle of seven years that’s celebrated in Judaism. At the end this period, farming land takes a rest and debts are cancelled. The last few Shemita years have also brought huge financial challenges to the world. On September 17, 2001, just days after 9/11, the U.S. experienced a Wall Street crash.  The next challenge was 7 years laters on September 29, 2008 when the stock market crashed big time – again, on the last day of a Shemita year. And now here in September 2015, financial fears and rumblings are already beginning again. Some expect September 13th to be a troubling day for financial investments.

In addition, a leading authority in Ultra-Orthodox Judaism, Rabbi him Kanefsky, has been encouraging Jews to head to Israel in order to welcome the coming of the messiah, which be believes will come at the end of the Sabbatical year – which is this September 13th.

September 15 – UN Resolution on the State of Palestine. It is possible that the UN could vote on making Palestine a recognized state during this 70th session of the UN General Assembly. According to the French plan, it would reinstate the pre-1967 boarders of Israel and split Jerusalem as the dual capital of both nations. At the moment, 136 nations have already recognized Palestine as a state, but the U.S. has always blocked recognition of Palestine by the UN Security Council. Usually, when this vote comes up, it is vetoed by the U.S. But this time around – I’m not so sure that Obama will veto the measure. And if this measure is forced upon Israel without certain security preconditions being met, – and if the city of Jerusalem is split, the end result will not be peace.

September 15 – Jade Helm Exercises End: Officially, Jade Helm is a series of military exercises focusing on large scale irregular warfare. The exercises end September 15th.  They are taking place in several Southern and Western States in the U.S. But there’s something about large-scale military exercises, black helicopters and rumors of taking away the guns of citizens that brings out the most paranoia in citizens. Is Jade Helm just a way to prepare the U.S. army for special warfare elsewhere? Or are they planning a national takeover complete with martial law and detention centers? People aren’t building compounds and stocking up on ammunition for fun! Distrust of the government is running high.

September 17: Congress’s last day to vote on Iran Deal: Love it or hate it – the world is making a deal with Iran that will release $150 million that have been held up in sanctions and will pretty much pave the way for Iran to eventually become a nuclear armed nation with all the weapons necessary to delver its payload. While Congress fights each other about this issues and play with words like “treaty” and “constitutional authority,” Iran is involved in a massive shopping spree in Russia.

Most of the U.S. Congress – and U.S. citizens are against the deal. But President Obama will see that it goes through. Much of the rest of the world is OK with the deal – secret side deals and all. Saudi Arabia is not thrilled (whatever they may say in public) and Israel is definitely not happy about it. For Iran it’s a total victory – and they are not ratcheting down their rhetoric against Israel or the U.S. in the slightest.  The big question is, “Will Israel do something about it?” And if they do, how will the world respond? Israel has fewer friends than ever.

September 22/23: Day of Atonement: Yom Kippur, the Day of Atonement, is the holiest day on the Hebrew calendar. It begins at sunset September 22 and continues through sunset September 23. The Book of Daniel says that 49 years will follow the issuing of a command to restore Jerusalem until Messiah returns. He will “make atonement for iniquity” (Dan 9:24-25). September 23, 2015 will mark exactly 49 prophetic years (360 days each) since June 7, 1967, the day that a command to attack and conquer Jerusalem was given by the Israeli Minister of Defense, Moshe Dayan. Some Christians believe that the Rapture of the Church will happen on this day.  (Leviticus 25:8-10 talks about sounding the loud trumpet throughout the land on this Day of Atonement.)

September 23/24: The Visit of the Pope to the US – Pope Francis will visit the U.S. – and apparently address Congress. He will be the first Pope to do so. Why? Most likely he will promote compassion towards immigrants, strengthening families, and battling inequality. I also understand that since it’s a “holy year,’ it will be possible to absolve the sins of those who have had abortions – or at least the Pope is outsourcing it – allowing priests to offer the forgiveness for this sin, as long as the person is truly contrite. Hmmm – one last chance to get a few things right with God?

September 23/24: CERN (Center for European Nuclear Research) hits full power which some in the scientific community have highlighted the possibility of opening “parallel universes and extra dimensions.”

September 23: Eid-Ul-Adha –  Festival of Sacrifice. As if September 23 was not busy enough, this dates marks the willingness for Abraham to almost sacrifice his son Ishmael. This Islamic festival also marks the end of the Hajj pilgrimage to Mecca.

September 28: The Blood Moons coinciding with Jewish feast days. 2014-2015 have brought the rare tetrad (4 in-a-row) lunar eclipses called “Blood Moons.” Each of the four has fallen exactly on a significant Jewish feast day. Some watchers are connecting these events to what the Bible says about the moon turning to blood in the last days. (Joel 2:30-31 and  Revelation 6:12) The final blood moon is scheduled to appear on September 28, the Jewish Feast of the Tabernacle. Some are predicting anything from world-wide earthquakes to the return of Jesus.

One of the reasons, says supporters, that this is significant is that 6000 years equal 120 jubilee cycles (49 years, plus one), lending itself to Genesis 6:3 where God says, “My Spirit will not contend with humans forever for they are mortal; their days will be a hundred twenty years.” Could it be that God was speaking about 120 cycles of Jubilees? 120 x 50 years = 6000 years?

If this intrigues you, check out http://www.torahcalendar.com  – an interesting resource combining ancient historical records, Scripture, and advanced knowledge of lunar and planetary motions.  Using a 360 day lunar calendar (rather that than today’s Gregorian Calendar) these fellows think they’ve got the dates all figured out. Why does it matter? Because it makes sense that God would mirror creation in 6 days followed by one day of rest and then allow human history to drag on for 6000 years, follow by a period of judgement and 1000 years of a millennium.  Tick tock, tick tock…

Several Imams are expecting the coming of the Madhi Coming in September? It’s not just the Jews and Christians who are predicting “apocalyptical” events in the near future. According to some Imams, September is the month for the coming of the Mahdi – the figure that has been waiting for the right moment – who will appear only when the world is pushed towards chaos and degradation. He will appear and help lead the world to a pan-Islamic  world.

Well, that should be enough to keep you on your toes during the month of September. If it turns out to be true – and if the world is entering a brand new phase, if financial disaster will befall all of us, if the Christian church will be raptured out of the Earth while God delivers divine punishment, if the the Mahdi appears and takes over the world , all I’ve got to say is this: be sure of what you believe – the future is not something to gamble with.

“Watch ye therefore, and pray always, that ye may be accounted worthy to escape all these things that shall come to pass, and to stand before the Son of man.” Luke 21:36