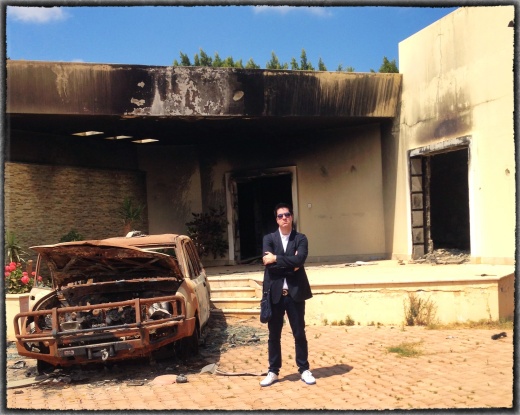 It’s the 12th anniversary of 9/11 – a dozen years have passed.  9/11 has definitively changed the world and the way people look at safety, security, terrorism, radicalism and how nations interact with one another and against one another.

But today is also the one year anniversary of another event: The murder of US Ambassador Chris Stevens and three other Americans in Benghazi, Libya. Still no arrests. Still no answers.

I visited Benghazi this past April to try to gain perspective on what happened – and what it meant. I wrote an article about it which you can read here. In summary, here’s the background on the situation:

Now it’s been one year – and speculation on what happened that night continues to grow, but clear answers do not seem closer. So I thought this would be a good time to review what happened, the prevalent issues, what’s been said and what, if anything is clearer.

Issue One: The Initial US Cover-up

At the beginning, the official US statement was that the attack on the US mission was a spontaneous protest spurred by a YouTube video that insulted the Prophet Muhammad. This story was pedaled by the White House to most media outlets. No one believes this anymore. Not many believed it then. I was in Egypt on September 11, 2012 and I went to the US Embassy in Cairo on the morning of September 12th where riots were occurring – and these riots were actually a reaction to the notorious YouTube video. It was a very different scene than what reportedly happened in Benghazi. It looked exactly like what it was – a bunch of people very upset, throwing rocks and expressing their displeasure with what they viewed as an offensive use of free speech. I stood with riot police, watched tear gas grenades being launched to hold the protesters at bay and discussed the situation with an Egyptian security representative who worked for the US Embassy. But it was clear that the violence was not coordinated, not preplanned and didn’t involved weapons. Very unlike Benghazi.

It has been speculated that Ambassador Stevens was involved in collecting weapons after the fall of Gaddafi and helping to move them to Syria, via Turkey to aid the Syrian rebels. Have these weapons fallen into the hands of jihadis? Probably. Did the American public know that our government may have been involved in arms transfers to Syria? Probably not. Does anyone remember what happened with Afghanistan the first time around? Obviously no. It’s never a good idea to give weapons to people who might end up using them against you.

According Jack Murphy and Brandon Webb, the authors of Benghazi: The Definitive Report, one of the possible reasons for the attack on the mission in Benghazi was blowback from secret wars that the US is waging in North Africa. When I asked Mr. Fateh Younis Elkhashmi, the chief editor of the New Quryna, Libya’s largest Arabic newspaper, about this possible scenario, he offered this statement: “Everyone knows that the US does whatever it wants. There are few nights that we don’t hear US drones in the sky. We know that the US is looking for terrorist activity in Benghazi, in Derna and in the Green Mountains. We know they are here. We know what they are looking for.” Hmmm….

Issue Four: There was a Warning?

According to Chris Stephen, a journalist for the Guardian, and one of the first Westerners on the scene, the US ambassador received a warning of sorts two days before the attack. A cable revealed a meeting between one of Ambassador Steven’s diplomats and two Islamist militia leaders, where the Islamists expressed concern that the US was supporting a secular leader in an upcoming vote for prime minister. The militia leaders warned that they could “no longer guarantee security,” if secular candidate Mahmoud Jibril won the vote. Still the US state department says that there were no warnings and nothing unusual surrounding that day.

Last month, CNN reported that sources revealed that dozens of people working for the CIA were on the ground that night in Benghazi. Whatever was going on and whatever kind of business was being run out of the CIA annex in Benghazi remains a mystery. According to  the CNN report, the agency is going to a lot of effort to make sure that whatever really happened remains secret. Sources told CNN that some CIA operatives involved in the agency’s mission in Libya have been subjected to frequent polygraph examinations. The purpose of the tests? According to CNN sources deep inside the agency’s workings: To see if anyone is talking to the media.

So, after a year of questions – we seem no closer to the truth. And few people seem interested in talking about it – or in providing answers. But the truth still matters. It matters to the families of those killed that night. It matters to those concerned about security at US embassies. It matters to anyone who is interested in truth and government transparency. It’s been said that it’s rarely the scandal that brings down politicians; it’s usually the cover-up. The Obama administration has put an awful lot of energy into this cover-up – which makes me think that it must really be worth it.  And that bothers me more. What could be worth this much effort by so many people?  And why hasn’t more effort been put into arresting the perpetrators of this crime? The media seem to be able to talk with likely suspects… Maybe the current administration thinks that with enough time – and enough noise and distractions, the questions will just go away. After all, there’s always another global disaster, scandal or injustice just around the corner.

2 thoughts on “Benghazi: One Year Out”