events that occurred at the hands of 19 al-Qaeda members back in 2001. Eighteen years. If this anniversary were a person, he or she would be old enough to vote. Old enough to join the army. But not old enough to be forgotten or to be relegated to a few paragraphs in a history book.

I had the privilege of visiting the 9/11 Memorial Museum in New York City last week. It’s not like visiting Auschwitz or a Holocaust museum.  When you visit those places at least you have the cushion of time to make them bearable. But 9/11 is still too fresh, just around the corner of one’s mind (unless you’re under the age of 25). 9/11 doesn’t represent an ideology like Nazism or Japanese racial supremacy which have been largely conquered and whose governments have been dismantled. The anniversary of 9/11 reminds us of what evil is capable of, that the Islamist ideology that motivated these murders is still alive and continues to flourish in too many parts of the world. Terror attacks have continued from North America through Africa, Europe, the Middle East and Asia.

For me, this year’s 9/11 anniversary is characterized by two particular things:

1.) Failed Negotiations with the Taliban

According to the New York Times, the US military has just stopped counting how much of Afghanistan is now controlled by the Taliban. The country is war-weary and many want peace. Personally, I don’t think lasting peace is possible between the Taliban and the Afghan government. I understand that President Trump wants to end expensive and unproductive wars – like our nearly 18 year run in Afghanistan. It’s hard to see any advantage to our staying in there. But politically it’s tricky. Taliban control is growing. The Afghan government is rife with corruption (nothing new), Afghanistan is a breeding ground for ISIS and al-Qaeda still exists. Even so, the possibility of some sort of peace agreement was being poked at. But not now. 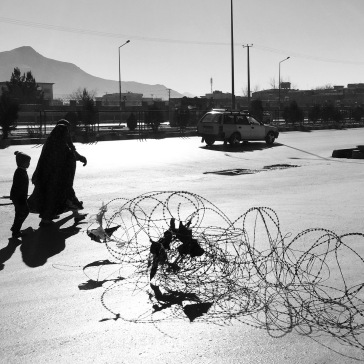 Last Thursday, the Taliban decided to sabotage US peace talks by murdering 12 people in Kabul, including one US soldier. Just a few hours ago, there were reports of an explosion near the US embassy in Kabul – no details yet. And to show us that nothing has changed, the Taliban also recently released a video that claimed that the terror attacks of 9/11 were completely the fault of the US and its foreign policy. Right. So many anniversary gifts from the Taliban. Perhaps just a card will suffice for next year.

The second issue that stands out to me on this 18th anniversary of 9/11 is a bit closer to home, where we’ve endured the confusing antics of Congresswoman Ilhan Omar over the past year. She’s not the only ridiculous radical leftist in congress at the moment, but she’s the most bewildering. In fact, I wish she’d just pick a lane and stay in it. I can’t tell if she’s a radical feminist who just does whatever she wants, like allegedly being married to two men at once (one of them possibly being her brother), flouting immigration law, breaking campaign finance regulations and destroying a marriage by having an adulterous affair with a married man. Or is she simply an observant Muslim woman demonstrating her modesty by wearing a hijab, supporting BDS (sanctions) against Israel and spewing Muslim-approved anti-Semitic remarks.

What is clear is her support for CAIR, (Council on American-Islamic Relations) a lobbying organization and a front group for the Muslim Brotherhood. CAIR is also an un-indicted coconspirator in the the Holy Land Foundation case that funneled money to the terrorist organization Hamas.  What is also evident is Omar’s disregard for the magnitude of what happened on 9/11, referring to it as an event where “some people did something.” According to her math, the loss of 3000 lives feels as if it might have infringed upon her civil rights as a minority. Yep – that’s it. That’s the true lesson of 9/11. Thank you, Ilhan for enlightening us.

I am pretty sure that when you can be elected to congress without holding many traditional American values, none of your civil rights are in danger. I can think of a few other things that might actually be in danger for Americans: Freedom of speech, equal justice, representative democracy and freedom from unproductive politically correct notions. In the midst of our complacency, it’s worth thinking about those dangers and acknowledging that evil persists in this world. There are people and beliefs – inside and outside of the US – that want nothing more than to destroy the freedom and liberty that many of us take for granted. An 18-year anniversary is a good time to reflect upon that.

As always, thank you to all who sacrificed on that terrible day, eighteen years ago. And my continued condolence to the lives that were shattered because of hatred and a belief system that promised eternity to those who would take away the lives of others.